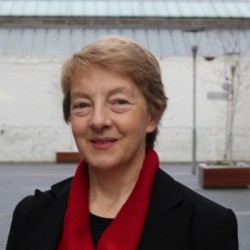 Dorothy Watson is a Research Professor at the Economic and Social Research Institute. She received a Bachelor’s degree in Social Science from University College Cork; and her MSc and PhD (both in sociology) from the University of Wisconsin, Madison.

Dorothy took over as joint Principal Investigator of Growing Up in Ireland in July 2018. In her capacity as ESRI surveys expert, she has also managed several large-scale national surveys (including the longitudinal ECHP survey in Ireland and SLÁN 2007), she has selected Irish samples for high quality surveys such as the European Social Survey (ESS), the School Leaver’s Surveys (SLS) and the Irish Longitudinal Survey on Ageing (TILDA).

Her substantive research has focused on social inclusion, equality and quality of life. Her recent research has examined the impact of the recession on economic vulnerability and the consequences for children’s socio-emotional development.

Read more about Dorothy’s publications and work at the ESRI here.

We use cookies on this site to ensure it is functional and for anonymous analytics information on how visitors are using the site.

By pressing accept you are consenting to analytics cookies. To switch them off or find out more see settings.

This website uses cookies so that we can provide you with the best user experience possible. Cookie information is stored in your browser and performs functions such as recognising you when you return to our website and helping our team to understand which sections of the website you find most interesting and useful.

Strictly Necessary Cookie should be enabled at all times so that we can save your preferences for cookie settings.

If you disable this cookie, we will not be able to save your preferences. This means that every time you visit this website you will need to enable or disable cookies again.

This website uses Google Analytics to collect anonymous information such as the number of visitors to the site, and the most popular pages.

Please enable Strictly Necessary Cookies first so that we can save your preferences!